We met on the island. She lived somewhere in the neighborhood around the summer house, belonging to no one in particular – she neither needed nor wanted to have any foster parents. She was an excellent hunter who could provide for herself and her five kittens.

Her name was an instinctive inspiration: Penicillin. Somehow it suited both her colorful character and her three colored fur.

Penicillin wasn’t particularly beautiful. She had huge eyes, semi-closed most of the time except when in a state of alert. She loved cuddling and rubbing her skinny body across wall corners and table feet. She was very social and intelligent. She enjoyed spending time with us but showed no particular interest in inserting the house except when she felt hungry and too lazy to hunt.

We spent many hours together. She would seat on the bench next to me and pour while I’d type on my laptop during the night. I was writing the final chapters of my first novel, a story about cats on a Greek island – what a delightful coincidence. The idea was born a year back, in a similar summer house which two kittens had appropriated soon to become my novel’s protagonists.

Penicillin wasn’t part of the novel. But somehow, towards the end of the story, she emerged inside the plot as naturally as a bubble emerges out of the sea. I couldn’t resist having her interact with the protagonists. Her sincere and caring attitude along with her sharp hunting skills brought an irresistible new dynamic in this cat-story.

So I went on writing with a new catacter on board: a chill-out nymphomaniac cat. The same cat that was purring right by my lap.

It was around the time of the final editing when I realized why Penicillin had entered the novel. She stands as a prototype cat. A cat that can hunt, nurse, socialize, bond and remain independent. A cat that balances in the most flawless way between her wild and her domestic nature. A cat that deserved to have a book dedicated to her. 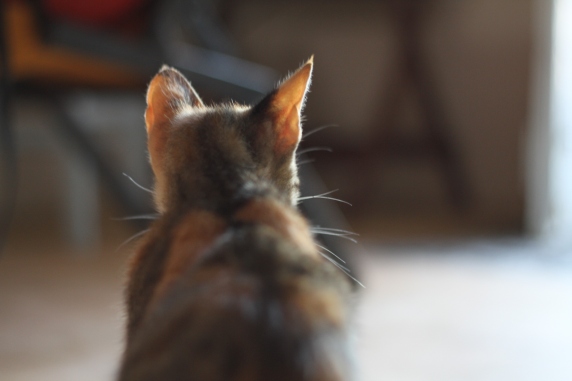